Our region extends from Swanage in the west to Southampton in the east. We have rides most months - see What's On for details - and are also keen to encourage members to link up with others locally for informal rides. This is particularly important because at present most offers to lead rides are coming in the east of the Region.

The cycling available in Wessex Region varies from the distinctly choppy in Dorset to the undulations of the New Forest and the hilly South Downs outside Winchester.

Whether you live in our Region or are visiting, we would be delighted to see you on one of our rides. Or you might like to ride out and meet us for coffee or lunch. Please always let the ride leader know that you are coming, either by phone or e-mail. Plans may have been changed or parking details amended.

2014-03-25 00:00:00Wessex
To find out what the Wessex region is doing, please go to www.cyclingnewforest.org/wessex-tandem-club.html

Spurred on by reports of other group activities, Wessex held a social chat Zoom attended by just 4 tandem couples. A further get-together with some short illustrated tour reports is planned for later this month.

Twelve screens joined our second Zoom get-together and we were delighted to see some new faces. We enjoyed a tour of Kent and an adventurous trip from the UK to Santander, as well as quick visits to Corrèze and Salviac. We hope to meet again if more material is forthcoming.

Our third Zoom gathering again attracted 12 screens and this time we explored the West Midlands, Warwickshire and Worcestershire, the new home area of John and Jane. The little villages and quiet lanes made us very envious. Then it was off to Holland for The Cheese Tour, courtesy of Ann, David, John and Sue. With windmills, canals, perfect cycle paths and busy little towns, Holland's delights were only tempered by some damp days and one very windy ride! Next time, off to sun and India!

Eight screens joined us on 14th April for a tour in India presented by John and Jane Taylor and an exploration of Brittany's Voies Vertes led by David and Alison Martin - quite a contrast!

Two rides to look forward to in Wessex this autumn: Sunday 26th September from Southbourne via the sandbanks ferry to Swanage, and Saturday October 30th from Chandlers Ford into the New Forest. See rides list for details.

Wessex Tandem Club October ride Chandlers Ford -> Minstead (New Forest) -> Chandlers Ford 36 miles, 420m elevation Woke to the sound of heavy rain, so we postponed departure by an hour to allow rain to cease and puddles to recede. 4 tandems including 1 Hase Pino departed from Chandlers Ford in bright autumn sunshine with a slight head wind. We picked up another tandem in North Baddesley and another en-route to the New Forest. This was the first Tandem Club ride for 3 couples out of the 6 tandems, who had discovered the joys of Tandems during the pandemic. The route meandered along the River Test, and then bridges over the M27 and A31 before reaching the tranquillity of the New Forest. We stopped at the Rufus Stone, allegedly the site where King William II was fatally wounded with an arrow, to ‘bag’ one of the Hampshire BCQ answers. Lunch was on the Village Green at Minstead. Interesting (and soggy) spot – the local church is where Sir Arthur Conan Doyle is buried – if you can’t find the gravestone, the pipe and magnifying glass might be clues! Refreshments at Minstead were plentiful – with a pub and adjacent Community Shop (coffee and Dorset Apple Cake recommended!) The New Forest was lovely in the sunshine although some roads were covered in leaves, twigs and puddles. There were two bridleway sections, the Test Way being gravel and a forest track with a muddy underpass. All tandems declined to go through the Ford as water+++ but fortunately an alternative crossing was available. We all arrived safely back to our various starting points and all agreed that we were so lucky with the weather! 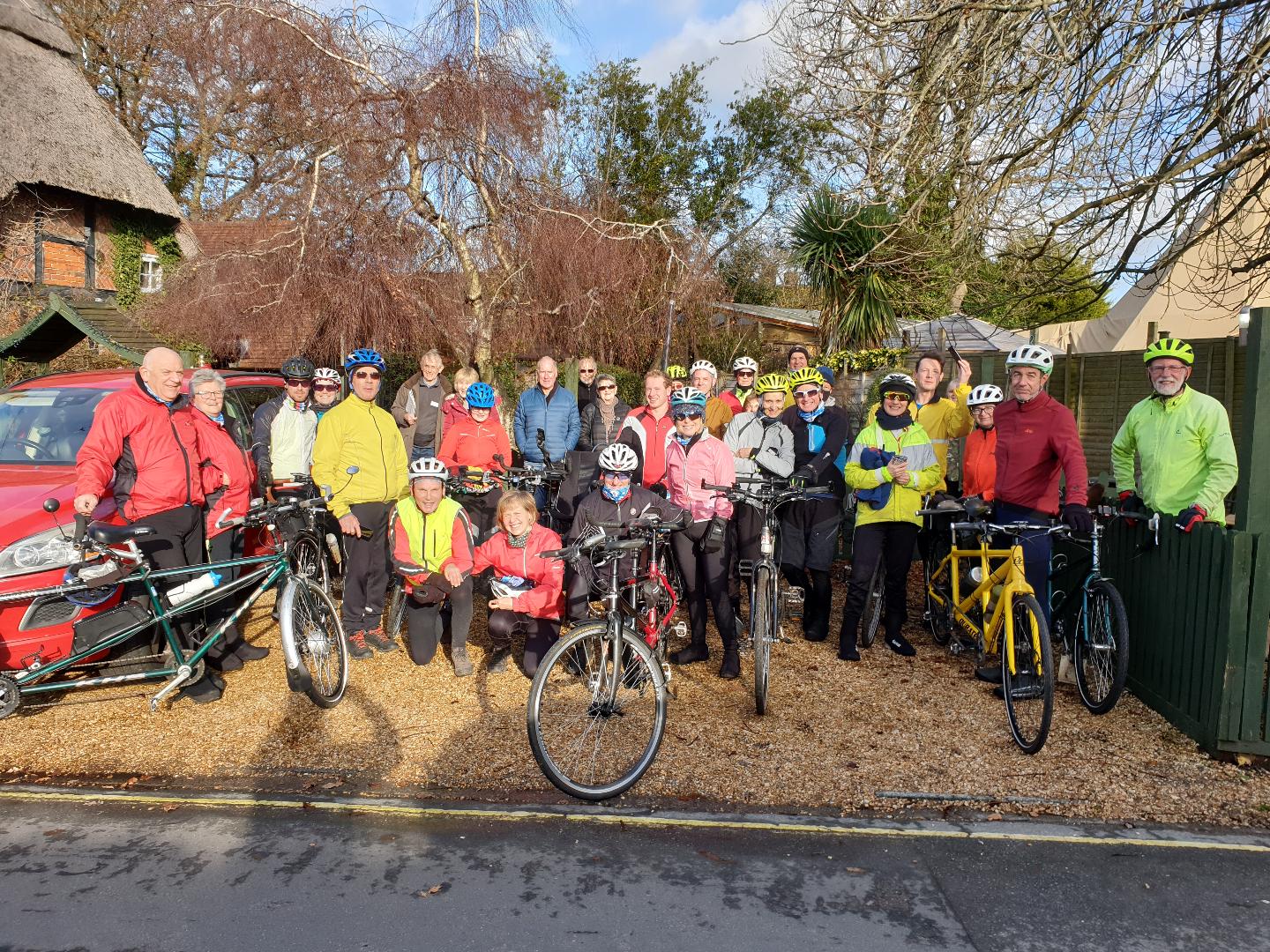 The Mince Pie Ride 4th December 2021: Seventeen tandem pairs came on the ride to Brockenhurst today, though not all on two wheels... And the sun shone almost all the time, though the wind was pretty cool! Four pairs were on their first Wessex ride, and we were delighted to welcome riders from as far afield as Poole and Eastleigh. Seven tandems and two solos rode in a group from Lymington while the rest rode or travelled from home direct to the Thatched Cottage Hotel in Brockenhurst where we received a warm welcome and enjoyed coffee, warm mince pies and chat.

Our next planned Wessex ride is scheduled for Saturday 19 March, starting from Romsey at 10am. David writes: "Not too long a ride, maybe aim to get back to the house for a late lunch inside. Possible coffee stop/shop on the way." More details later. 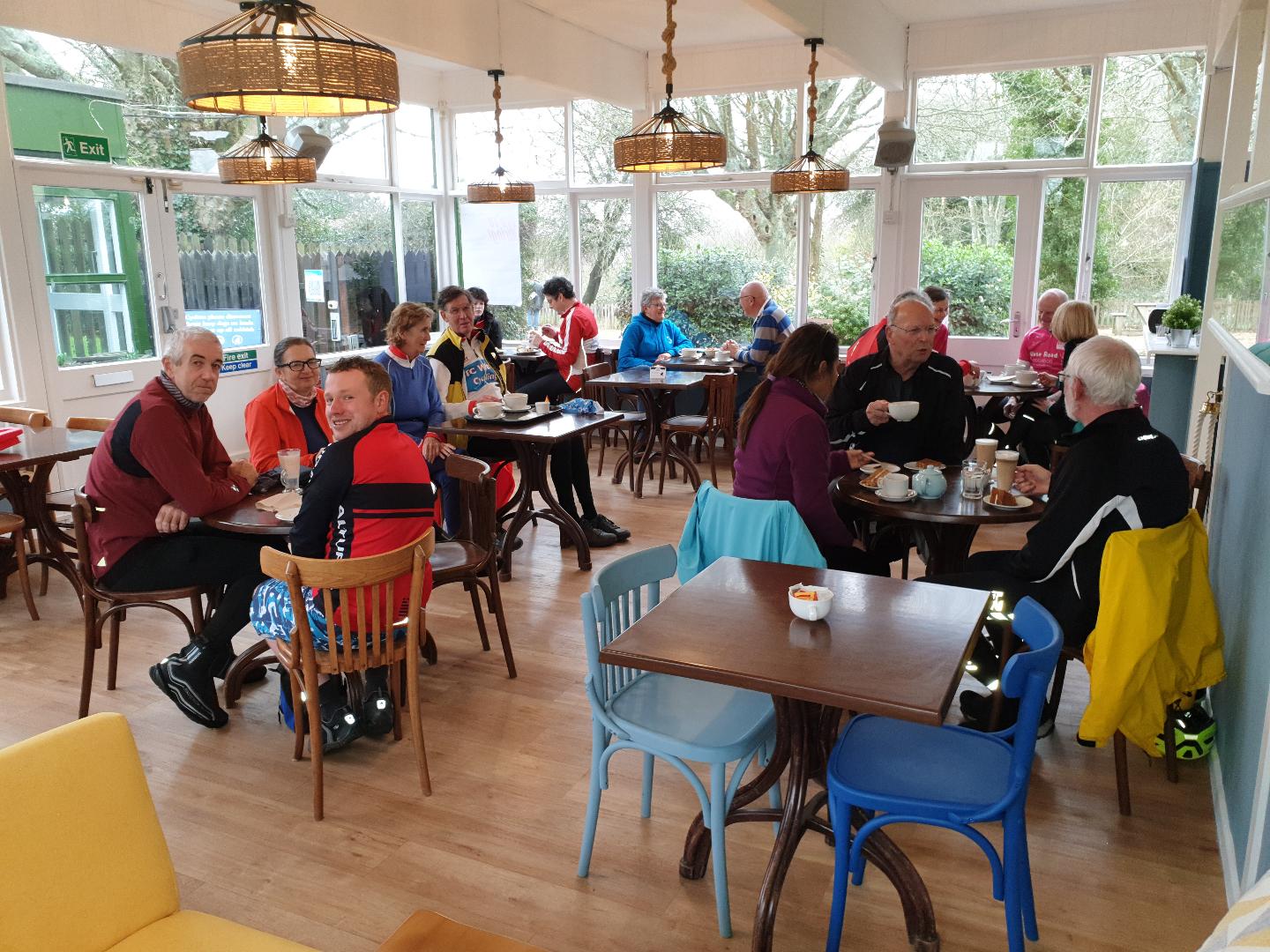 The Wessex Region's annual 'Soup Run' took place today shortly after Storm Eunice had departed. Six tandems and a solo gathered at Lymington Town Hall for a wind-assisted ride in the east of the New Forest along mainly hedge-sheltered lanes to the 'Captains' Table' café at Bucklers Hard. We saw signs of fallen trees having been cleared from the lanes en route. On arrival we were met by two more tandem pairs for coffee and a variety of cakes and buns. With a yellow wind warning imminent, we set off westwards for our homeward route, encountering strengthening winds in a few spots - it was a round trip of under 20 miles. The riders then settled into John and Sheila's conservatory for a selection of home made soups and to devour their own indoor picnic lunch, followed by hot drinks. We were delighted to welcome one new tandem pair, who discovered that they had connections to two others during the coffee and lunchtime chat. 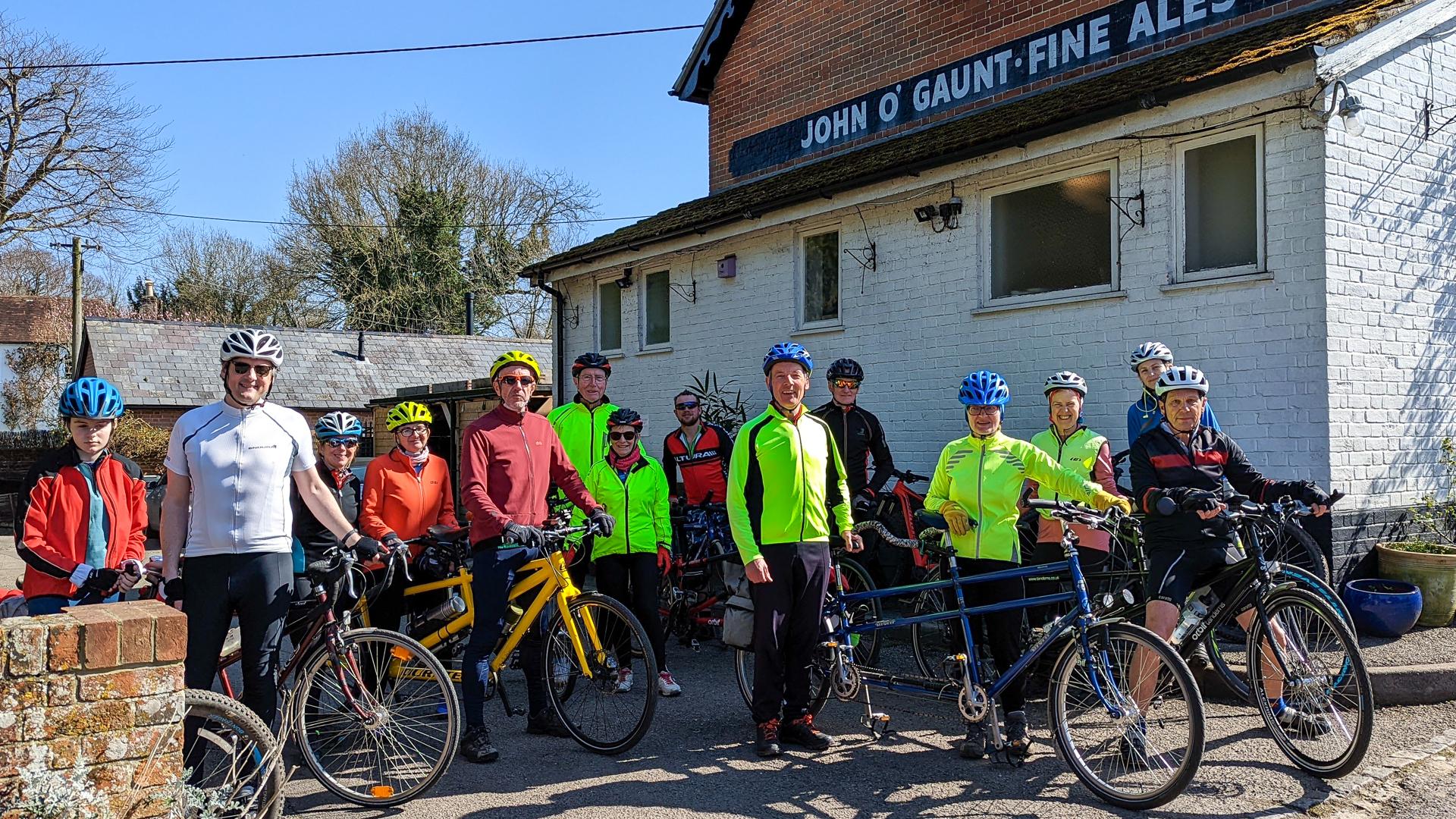 Wessex March ride Can anyone imagine better weather than we had today? Okay, maybe a bit less wind at times might have been good. Mark and Sarah had to pull out because of a bad cold, leaving 6 tandems and 2 solos to tackle the challenge. Cliff and Bridget also from Romsey with their powered steed. Jack & Nic along with Josh had ridden all the way from Highcliffe and further (wow!). Simon and his daughter Elm did that too but 'only' from nearby Braishfield. Simon & Anne and daughter Sarah (solo) did that too, from Chandler's Ford. Which meant that Doug and Shirley rolled up in the only vehicle. I think we were very green! Alison and I, however, can hardly claim to have ridden to the start: all we had to do was fall out of bed! We took the road to Braishfield, nearly back to where Simon and Elm had just come from. Then the road to Merdon, encountering the first proper climb, albeit short and sharp. Down briefly to the main road and up towards Sparsholt, turning left where there is a sad memorial to a cyclist, and up to Farley Mount. Then an enjoyable roller-coaster ride down to Kings Somborne. There Simon noticed his mum out walking the dog and we all gave a wave. A few yards on the main road then off towards Horsebridge and our coffee stop at the John O'Gaunt, spot-on the planned 11:30am. The promised chocolate cake was very good and we all took our cake and drinks out into the sun. After a quick group photo, and a decision that we could slightly lengthen the route, we headed for Houghton and down the Test Valley, soon turning west and climbing up and across the Broughton road and then south to East Tytherley. Then Lockerley, Dunbridge, Kimbridge, Michelmersh and Braishfield where Simon and Elm left us. 12 of us continued on the predictable route back to the house. 48km covered, 30 miles in old money. And 580m of ascent. 2pm back at the house and we enjoyed some of Alison's biscuits with our lunches and drinks, and the sun was still on full beam. Josh and Jack and Nic were the last to leave and we hear their total distance was just shy of 100 miles! We hope the easterly wind helped, but still - wow! David and Alison Martin

Only a week to the Sutton's BBQ at Mudeford on Saturday 2nd July, preceded by a ride led by Stephen and Jill Gray from Mudeford to Burley for coffee, where some tandems may join direct from home. If you have not already received details, please contact sheila.lymington@gmail.com

Login to post
What's On
The Suttons' summer BBQ and ride. Starting from: Entrance to Avon Beach Car Park, Mudeford, at 10:00, 20 miles, Easy
Stephen Gray will lead a ride to the Old Farmhouse at Burley for coffee, leaving the entrance to the Avon Beach Car Park, Mudeford, at 10 am, while other members may like to ride straight to coffee from home. Please let Stephen know if you plan to join him. Returning to Mudeford for the BBQ at 1.30 pm. Please let the Suttons know if you plan to attend, and tell them if you are vegetarian. Bring £10 per head in change as there will be a charge for food and drinks available at cost. Stephen Gray
stephencharlesgray@gmail.com John and Sue Sutton, Laurel Cottage, 148 Mudeford BH23 4AY
john_sutton5@sky.com

Location: PetersfieldPostcode: GU32 3EEMap Reference: 51.0066, -0.94114Ride length: 36 kmRide ease: Average
This is a signed route produced by the council SEE THE PDF FILE FOR A DETAILED DESCRIPTION Starting the route The route is signed with these distinctive signs. (Brown Cycle Signs) The best option for starting the route is to bring your bike on the train to Petersfield (or Liss) railway station. Howe ...

The ability to download all the rides, by a member, in a zip file will be available once the rides have been published here.