Things wanted.
To add a response or post a new message you need to have an account and be logged in. You can get emails sent to you by enabling the Send Forum Emails tick box in your user preferences. Note you need to login to the website to add replies. See our help information here for more information.
You can add to this discussion topic using the entry box at the bottom of this page, when logged in. Login

Hello Tandem Club! Have a 1936 CB Silver Ace in progress, need all the small parts to complete the build and first post so apologies if some of these things have been listed (do point me at them) or if they're simply impossible to source and I need some plan B's (c's, d's...)

- The bolts that tigthen the front bb (which I gather need to be super-stong.) Need a pair, can supply pics of the knackered ones and dims.

- A 3spd SA cable (with the really narrow ferrule?) and tandem length (natch :)

- A wiring loom for a '67 SA with integral dynamo (or the instructions or a link to the way to do this.) Have tried roughly to do this and failed so a. need to get new bulbs in case or b. do it properly.

And, naturally, and advice or retailers to hunt down the last few things. 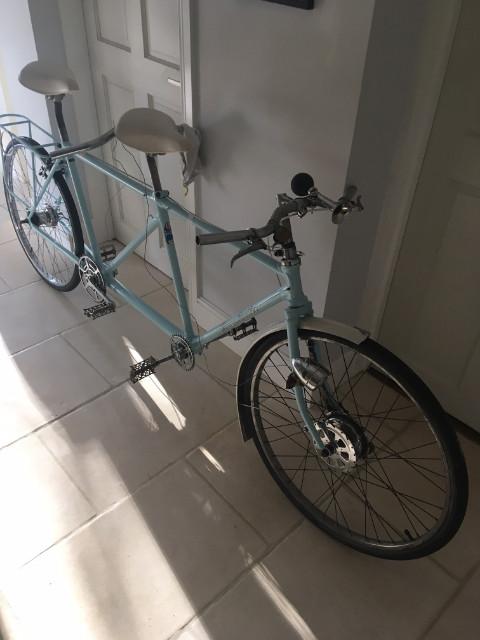 You haven't said where you're based. We have a chap called Graham Hicks working on our CB tandem restoration at the moment. He seems thoroughly knowledgeable.

Ah, cheers Sharyn, will drop them a note.
Am in Oxfordshire by the by.

1/ The bolts which tighten the frame around the eccentric in my experience don’t have to be especially strong. I position the eccentric so that the spindle is in either the “12 till 3” quadrant or the “6 till 9” one. This means the reaction of the pilot pedalling if the eccentric was to spin, would be limited by the chain. In practice I’ve not had a properly tightened one move.

The ideal bolts would have the special head that has the anti-rotation lug on its underside. This lug engages in the small hole adjacent the main hole in the mating part of the frame, so that one spanner only is needed to do up the bolt. It is a smaller version of what is used for clamping in seat pins.

What I have used is a standard bolt, 1¼” or 30mm long. As a standard bolt lacks the anti-rotation feature, you have to use a nut and two spanners. Even though I don’t reckon it needs to be especially strong, I notice Toolstation sell a pack of ten M6  x 30 high tensile bolts for 65 pence (https://www.toolstation.com/high-tensile-set-screw/p47162), which should do the job.

2/ Sturmey Archer hubs and tandem use. I have used a standard (non-dynohub) SA  (an AW) on a tandem for years, and it never came to any harm. But my understanding is that they aren’t designed for the extra loading that a tandem gives. So I would be a little bit cautious in running a dynohub on your tandem: when the axle bends or breaks it would rather spoil your ride. There were a very few SA hubs intended for tandem use, but I don’t think any of them  ever incorporated a dynohub.

3/ If (as I did), you risk it and run SA hub gear at the back, then I wish you luck in sourcing a perfect length trigger cable. I think the thread on the toggle chain where the cable attaches has always the same size, so your talk of a narrow ferrule doesn’t really matter. My work-around is to splice in some normal Bowden gear cable after cutting a conventional (short) trigger cable one in half. What I use to do the splicing is the metal parts of electrical terminal strip (https://www.toolstation.com/connector-strip/p85099). That’s another 66 pence gone. I would never use such an arrangement in a safety critical area such as braking, but if a gear cable goes on a SA then you’ll be stuck in a high gear, that’s all. I’ve used this on various gear cables over the years, and it has worked fine for me.

4/ I’m no expert on the electrical wiring even when I ran dynamos.  I disregarded the normal practice of using the cycle frame as one of the conductors and ran both outputs to each bulb in two core cable. I found those switches on top of the dynohub front light to be so crude that they never reliably worked.  The modern led lights are so damn good I don’t run any dynamos any more.

5/ I have no connection with Toolstation, and I’m not trying to get you to spend £1.31 there in order to line my own pocket!

Hey Mark, that's all really helpful. Off to Toolstation then :) Bit worried about that back wheel now, even though was sold as belonging to a tandem. Hmm. Have two rear SA wheels and two Cyclo mechs and shifters ha ha tandem is hard!