To mainly ECOSMO Tandem owners . . . I've  converted a Ecosmo tandem to a trike with a custom rear axle with Diff and twin Disc Brakes. I need a second rear brake mech preferably the same as already fitted to the Ecosmo (Incidentally, both front and rear Disc mechs on the Ecosmo are the same!).

Does anyone the make/model of the Disc Mechs use on the Ecosmo. It's just marked "Speed". I guess that it's quite likely they are sourced/manufactured locally by the makers of the bike in China!

I have emailed ECOSMO here in the UK but no reply. If all else fails, I'll take the one off the front so that they are a matched pair and fit a new Shimano/Avid in It's place!

I'd be interested in a picture or two of the end result of your conversion if you have a chance.

Hi Rob, many thanks for your message. I took a few pictures but even with "flash" and taken in a gloomy garage the have very poor contrat and lacking detail. Getting close to being able to wheel it outside and hopefully, be able to get some decent pictures. I'll  post some shortly.

The Electric Tandem Trike is just about finished. 160mm Disc Brakes on each wheel. 7 speed plus Differential  on the rear Axle. 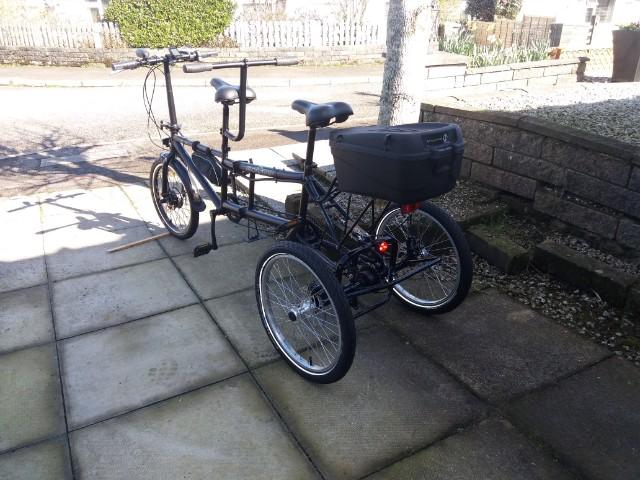 Robert Jamison2022-03-15 19:32:33
fascinating; I have many questions about your project, but this will probably bore other discussion board users. Will await the final portfolio of pictures; good luck with the final steps.
Login to post