We tandemed down to Gibraltar and the Spanish mountains are just that - mountains. On descending the first pass the rim V-brakes overheated, melted the plastic rim tape, thus exposing the spoke holes, which caused the tube to explode and the tyre wall to shred for a 4" section, exposing the wires, and we hit the deck. Thankfully we had been slowing up to take a right turn, so impact speed was 20-25kph and we limit ourselves to 40kph. 80km ambulance ride to hospital ensued for a brain scan and help with unpleasant facial cuts and bruises. Thankfully nothing broken or serious. All healed after a week.

We were riding an Ecosmo folding tandem with 20" wheels, Schwalbe (Road Cruiser) tyres and tubes, with 2 panniers and a Burley luggage trailer in tow. All up about 190kg. The brakes had been fairly full on for 2.2km and an average gradient of 1 in 10 according to the map.

Disc brakes then come up for discussion to avoid this problem and unhappy experience. Does anyone know of when disc brakes fail, perhaps through similar over-heating or some other issue?

Perhaps the more familiar (to me) and possibly more robust rubber rim tapes are the simple answer? 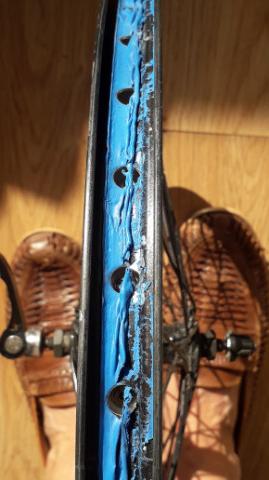 You're lucky to have not suffered a worse fate. We had a brief time with rim brakes - but then moved to the largest rotor size discs and hydraulic.

It's easy to see the difficulties of stopping a tandem vs a solo when you realise that they have essentially (at best) the same braking force (2 rim brakes) but c 3x the mass (more in your case with a trailer!) and then also trying to disperse this amount of heat energy.

Perhaps another reason, beyond pure safety, for just binning rim brakes and moving to discs is enjoyment. Once you stop worrying about braking, you can enjoy the scenery and the exhilaration of a well controlled descent.

You're very lucky - time to change to discs if you want to keep touring safely in mountainous regions.