I have my father's 1930's tandem which I propose to restore , I have all the original parts.

Has anyone done this before and do they have any advice please. 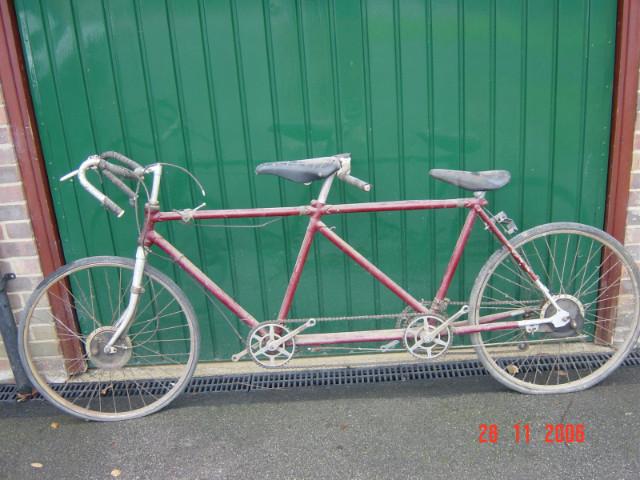 Restoring a pre-war tandem to it’s ORIGINAL spec would not pose too many difficulties BUT the moment you try to upgrade it to CURRENT spec you will run into numerous problems. Just about every part of the machine will different to modern tandems.

Pre-war machines had very poor brakes few gears. After 90 years steel frames are usually rusty to the point of being  unsafe to ride. The cost of your project should be carefully considered before you start.

As a member of the Veteran Cycle Club I can assure you that we often ride bikes from the 1930s and earlier - even Victorian. The motto of the club is Restore, Research, Ride  - so my I suggest the advice you seek will be available at Veteran-Cycle Club – For Whatever You Ride (v-cc.org.uk) You will find expert advise there, especially if you join for the bargain price of £25 per year, or you are likely to find buyers for your excellent machine. You would probably enjoy the runs to when they restart.

We can only endorse Martin Lowe's comments.  We have ridden in a variety of VCC events and Leroica style events on vintage tandems and solo bikes; even at a "normal" event we are looked on as being very retro.  All good fun and we are looking forward to the return of such events in the future.

I endorse Martin and Pippas words. The place to be about old bikes (and tandems) is the VCC.

From over forty years playing with the old bikes (and tandems), I’ve never had a single machine fail by rusting through. Yes, steel rusts, but it’s always been obvious beforehand if the frame is on it’s last legs. A solo I ride hard everyday is getting on for fifty years old, and I also ride a 1930’s solo at weekends, again quite energetically, and after some years of this neither steel frame shows any signs of letting me down.

Are you intending to try for a restoration in as near to original specification as possible, or fitting modern parts instead? Either way, as I believe I’ve mentioned before in previous discussions, there isn’t any money in it, as old tandems just are not valuable. Even a plain respray would quite possibly cost more than the price you’d get for the whole machine.

That being said, as long as you have the original parts and they aren’t worn out, then there is great pleasure in rebuilding and (gently) riding machines that are nearly a century old. Looking at the photo, yours has drum brakes front and rear, which I’m not a great fan of. If they were ever effective, then ninety years later their retardation ability has usually gone. So gently does it on trying to stop on a sixpence. The old transmission of cranks and three speed hub may need new chains, but such is the quality of the old equipment that the rest may well be serviceable.

Any idea what make the tandem is? I have a quiet thought as to this, so I enquire if there are on the headtube, or halfway down both seat tubes any remains of a big letter S?