We've had our Galaxy tandem for 5 years.  Our experience with rear hubs isn't good.  Its a 48 hole model.

The original (Oryx) hub collapsed when the bearing cup on the non-drive side cracked whilst on tour in Wales.

We replaced this with an Orbit hub with 4 sealed bearings to take the load but this lasted about a year before the free wheel drive ratchet catestrophically failed resulting in no drive and needed a rescue. (The ratchet ring strips the threads inside of the alloy hub)

The hub was replaced under warrenty but that too failed after a year in the same way this weekend resulting in a long walk back to the car.

The conlculsion is that this design of hub where the freewheel ratchet is screwed into the hub is not strong enough for hill climbing.  Obviously our strength exceeds that of the hub!

Given that we like to go on tour, I would like to have some confidence that the hub won't let us down.  Noting some of the epic tours in the Journal, what do people use?

Has anyone else had similar issues and did they find something reliable?  (Or do most people get off and push up hill?!!)

(E-Tandems must be put under even more load so how do they cope?)

How long is a piece of string?  Have Orbit had other hubs fail in the same way, anyone else out there had the same experience as you?  If not after two identical failures I am afraid I can only suggest you may need to spin more and avoid stamping on the pedals.

I am a heavyweight and match most tandem teams for mass.  I used to tour extensively, camping, with trailerbike and daughter on tow as well.  Nothing ever came past us downhill so I am sure we tested stuff well beyond design limits as you have.

I have broken many hubs on tandems over the last 50 years including five Hope ones, the cassette carriers crack before the flanges on later hubs (Big uns), post the 80s "tandem" hubs.  Hope styopped making parts for them a couple of years ago anyway.  If you can find a used 48 big un I have 140, 145 and 160 axles to fit them should you need to source one.

The hubs I have not broken are Hadley, only available at 160mm OLN for Santana, so good for me but not your Dawes.  I haven't broken a DT one, but they are "only" 40 spoke.  I have Hugi ones that havent broken either despite only 2 pawls, but they again are obsolete and 160mm OLN.

In 2018 I custom built from a new frame my "last" tandem and used NOS parts fitting IMHO the best ever rear hub, a Campag tandem hub, 48 spokes, but limited to 8 speed Campy cassettes.  Along with Record 8 speed ergos and Euclid running gear I have a bike I am confident will outlast me and would suit the use you need as well.

In your position stuck with shimano running gear I would try the Synergy, it at least has cold forged flanges so only the engagement ring to worry about, or splash out on a DT 40 hole and have it built properly with Sapim strong spoes, that will take the load well enough.

Good Luck whatever you pop for, these days I envy you the knees for loaded touring of Welsh hills. 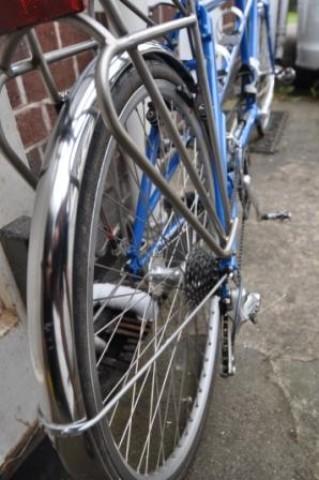 We have three tandems. The Swallow has been used for heavyweight touring, running on a Campag tandem cassette rear hub, laced 40, and so far never given an ounce of trouble since fitting it in the early 1990s. The 'factory' Claud USWB has been used for light touring and off-road riding. It has a Swallow 48-hole tandem rear hub with a screw-on Shimano 7-speed freewheel. No issues since being pressed into service in around 1998. The properly hand-built Claud USWB is used for fast light day rides, with the occasional weekend trip away. It's running a Mavic sealed-bearing 36-hole solo rear hub with another Shimano 7-speed freewheel. Largest sprocket on all tandems is 32, driven by 24, 28, 28 respectively. Our combined weight is around 25 stone.

Each machine is stripped down, cleaned and lubricated once a year. Apart from having to replace the Swallow hubs' bearings (both front and rear) all are running nicely and have been issue-free.

Old style screw-on freewheels were always a nightmare on a tandem - we broke quite a few and in more than one case damaged the threads on the hub. In one case we think the hub damage originated with the extreme forces we needed to remove the previous broken freewheel! We toured regularly carrying a spare freewheel! With an Arai hub brake on the other side it was possible to reverse the wheel and do without the hub brake as an emergency repair - but that needed some roadside re-dishing of the back wheel! What broke them was invariably climbing very steep hills in crawler gear whilst loaded for camping trips, although in a couple of cases where the pawls in the freewheel chewed up the other parts the damage didn't manifest until a few miles later.
After several breakages we put our pedals 90degrees out of phase to even out the torque. This largely stopped the problem but it always felt awkward and probably made us less efficient.
Since we've been riding freehubs and cassettes we have never had those problems, but this could be because our riding habits changed - first with carrying children (only one adult per tandem) and subsequently we have done less camping touring and probably don't have the brute strength in our legs anyway.

To add to my last post, we did recently have a cassette fail from the same sort of stresses - a Shimano XT 10-speed - where the alloy spider holding cogs 4-6 (counting from the biggest) broke. A look at negative reviews of this model on Chain-reaction cycles showed that quite a few mountain bikers had experienced the same failure and suggested that the cheaper and slightly heavier SLX model was stronger.
Inevitable, the breakage occurred at the furthest point of our ride and rendered the four middle gears unusable meaning we had to complete the ride with a choice of only very high or very low gears and some distinctly odd chainlines as we tried to compensate using different chainrings.

Interesting Philip about the out of phase. We've got a Thorn Rohloff and have always preferred out of phase by about 5/6 teeth but have just had the rear hub casing crack. This means a potential 8 - 10 weeks downtime whilst the hub goes back to Germany via St John Street cycles. Well it would except SJS are going to lend us a rear wheel - what amazing customer service! Anyway, I did wonder if our out of phase was a contributer although that doesn't make sense I think. Any thoughts? 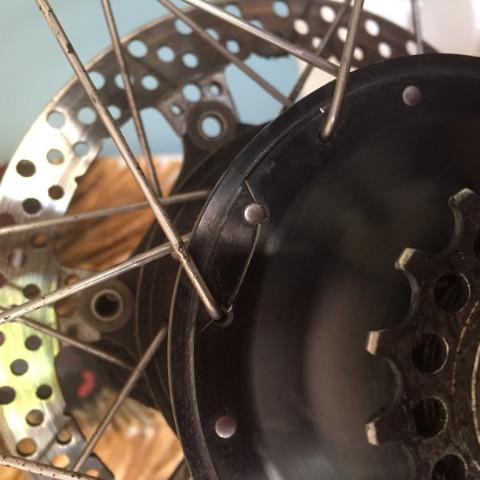 Never had any problem with our Shimano HF-FH07 40 hole hubs (8 speed cassette with 34 tooth largest sprocket, now 24 years old and still running as smooth as silk. We are a heavyish team having had a combined weight of between 25 and 28 stone over those years. Have done a couple of lightly loaded tours one set of panniers rack bag and h/b bag (not camping weights though). Not sure if Shimano still make a tandem specific hub though as a search for Shimano Tandem hubs only only brings up used ones for our model (mostly on eBay) Gather from forums they were supceded by HF-FH08

Interesting that you had a Rohloff casing crack even with the reinforcing rings fitted. Do you know if the reiforcing rings round the flanges fitted when the wheel was first built or as part of a subsequent re-build? I assume that the wheels are 26" rims 32 spoked using directionally drilled rims (Ryde Andra) as this is how Thorn tandems are usually equipped.

Nick, It is conceivable that pedalling out of phase exerts some frame flexing mode that is different from usual but I doubt that would cause your crack - do you manage to get out of the saddle with out-of-phase cranks? Thatw woudl apply wierd twisting stresses. The only time I have had fractures anything like that have been down to radial spoke tension. There is a bit of radial component to the spoke pull on your wheel but not enough to expect trouble - a big pothole or crash of some kind would seem most likely.
Pneumatic tyres do a very good job of distributing shock loads around the wheel so normal bumps, even quite severe ones, don't stress it very much (although sideways or twisting bumps can be worse). However, if the tyre bottoms out against the rim then you get a very acute stress at that one point - and usually a pinch puncture at a minimum!

Hi Philip - no crash or puncture here! Just age and poor design I suspect. It's back at Rohloff now so we're just waiting for the bill...

Nick, I had exactly the same problem on my 7 year old Rohloff equiped Thorn tandem.  SJS were brilliant and sorted the problem out dealing with Rohloff directly.  In the end I had a new casing and completely respoked wheel with the latest recommended spokes, all free of charge and turned around in about 7 days.  When touring, the all up weight including bike and bags is around 190KG and we've been up and down some very rough mountain tracks without any further issue (we use 1.75" Schwalbe tyres).  I'm sure SJS will get you sorted soon.

Thanks Simon - we'll have to pay as the bike is secondhand (not sure what difference that makes but there you go!). The hub is now registered with Rohloff so hopefully there will be a guarantee. As you say, SJS have been really helpful.

Hi Stephen - the bike was with the rings when we bought it at c.4 yrs old. Judging by the condition it had had an easy life so I imagine the set-up was original and we've had no work done to it since.

Thanks for your help everyone.

After extensive research I've gone for the Synergy.  There is very little coice of 48 hole hubs - Orbit, Synergy and White.  I could write a whole article in the Journal on the amount of research hole required!

40 hole hubs are more common but there is little choice of rims - you can't win! (Some can't be used with disk brakes either)

We'll see how long this one lasts - at any rate it has a 2 year warrenty.  Thanks to Peter in the Tandem Shop for his help and advice.