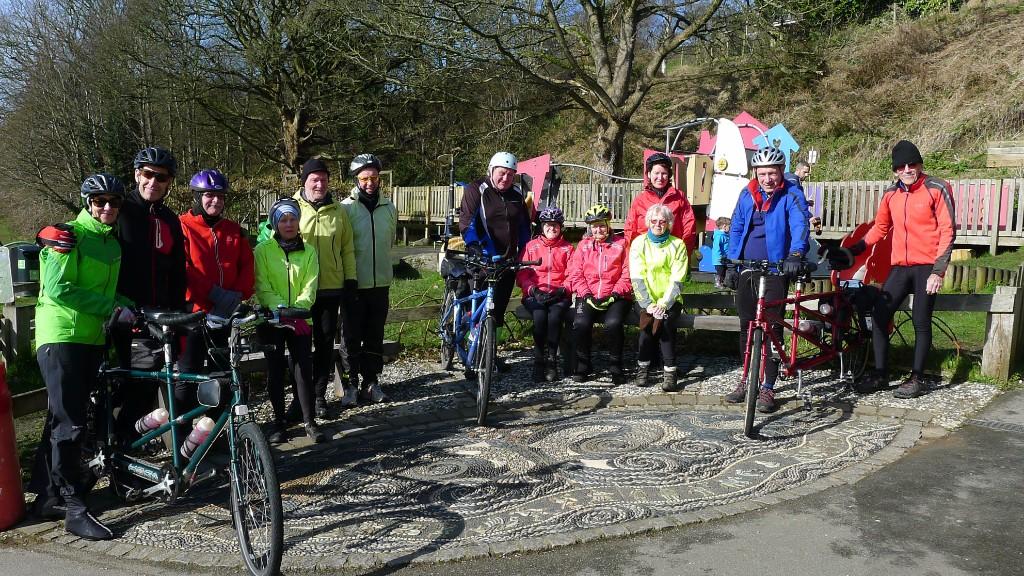 LA & FY Tandem ride Sunday 08.03.20 Six Tandems, and two solos, turned up at Carnforth Station for our March ride. So far this year, bad weather has forced the cancellation of our February ride, so riders were eager to get out again. The other problem, like other parts of UK., has been flood water. Having left the station we took the marsh road to Cragbank, which fortunately wasn’t flooded. From here, we passed through the village of Bolton Le Sands, to Halton for elevenses at the Community Centre cafe. The Community Centre was busy with sports and a church service in progress. On leaving Halton, we crossed the River Lune, which was noticeably very full of water, to access the cycleway to Caton, where we returned to roads, climbing through Quernmore. This is a pretty valley, and yet only a couple miles from Lancaster city centre. Here sheep roam on green pasture, and you could be miles from anywhere. The route to the lunch stop took us through Galgate village to Ashton Hall garden centre. Here we met two more members of the club. We had planned to use the cycleway back into Lancaster, but this has been badly flooded, so we stayed on the lane through Aldcliffe, which is a pretty way into the town, alongside the Lancaster Canal. By now, we had little option but to pass through the centre of Lancaster, which fortunately wasn’t too busy. The Millennium Bridge is an easy and interesting way to cross the River Lune by bike. The city of Lancaster has some good cycleways. Finally, we headed through Nether Kellet back to Carnforth, around thirty enjoyable miles. We enjoyed a final stop at the station cafe, for tea and coffee, which is famous for the filming of the film “Brief Encounter”. We look forward to next month’s exciting episode! Paul Rodman