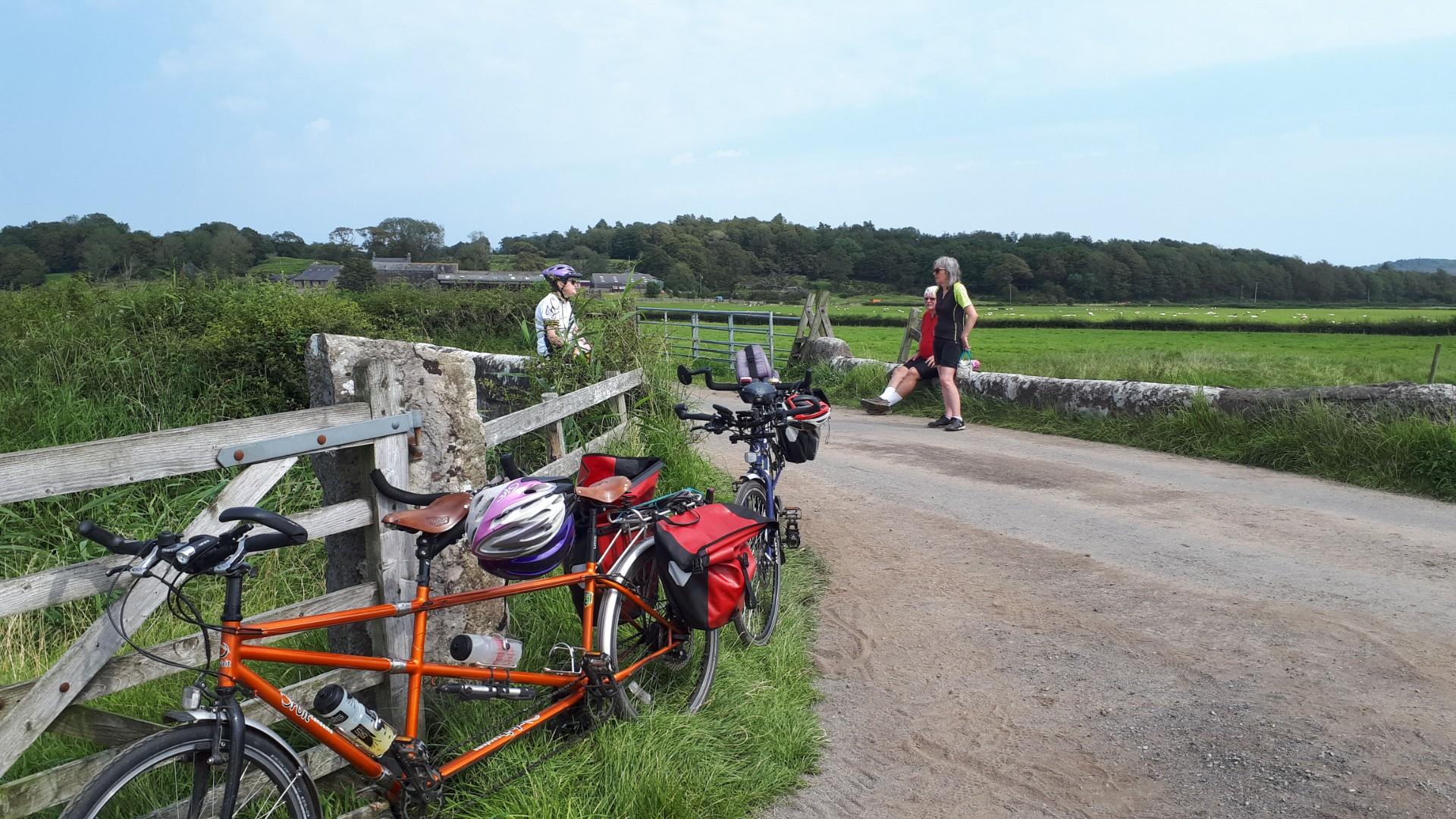 August marked a return for the Lancashire and South Cumbria Group to group cycling – well almost!  With the current restrictions, we are limited to 6 riders, or three tandems in a group, and today there were 4 tandems.  So we decided to have two groups.  John and Anne led a ride for two tandems on the Fylde and into the Bowland hills and we led a ride for two tandems in South Cumbria taking in a few fells before a lovely ride down the Winster Valley.

We left Kendal with Paul and Jeannette on a glorious day, perfect for cycling, and headed via quiet lanes to Staveley and the Lakeland Farm Centre at Ings for coffee.  At the same time (40 miles south of Kendal), John and Anne were setting off with Hayley and Simon from Great Eccleston Square and cycling through the village for the short ride to their coffee stop at the Light Ash Cafe, Myerscough, on their way to the Bowland Fells.

The Lakeland Farm Centre at Ings has only been open a couple of years and there is plenty of room to sit outside the café with your refreshments.  It is a glorious spot with fantastic views of the Lakeland fells as a back drop to the seating area.  The next stretch south from Ings is up a gated lane south from Ings and can be a ‘bit of a challenge’ shall we say, for tandems.  We are fortunate to have electric assist, and we took on gate duty so that Paul and Jeannette didn’t have to stop, though I think they might have been glad of a breather at the odd gate on the climb across the fell.

Once at the top, the hard work for the day is done, by and large, with a picturesque run along narrow, but very quiet lanes down to Bowland Bridge and along the Winster Valley to Witherslack.  We rode on towards Meathop to our picnic spot on the edge of Meathop Marsh.  The weather was warm, sunny and our position on the marsh afforded us superb views of the fells further north, safe in the knowledge that the afternoon ride across to Gilpin Bridge and Levens Hall for an afternoon tea stop, was going to be flat. Hills and climbing in the morning, and a leisurely flat ride in the afternoon across the Winster and Lyth Valleys – perfect planning!

Meanwhile, John and Anne were leading Hayley and Simon through Bilsborrow into the Forest of Bowland, towards Bleasedale, before a gradual climb north through the hills of Oakenclough and Harrisend Fell.  Here there are terrific views over the Lancashire plain to the coast. It was then downhill all the way to Scorton for the lunch stop, where they found it noticeably warmer and less windy than up on the hills.

The two groups kept in touch during the day, messaging and sharing photographs of their rides via WhatsApp.  Modern technology is simply amazing.  From the shared photos, it did appear to be warmer and less windy in Cumbria, which is unusual for our part of the country.

As we completed our 38 mile day out in Cumbria with a leisurely return across the Lyth Valley for afternoon tea at Levens Hall, John and Anne were doing something similar, cycling back on a flat route along the lanes to Stakepool and across Pilling Moss. They returned to Great Eccleston by crossing the River Wyre at the Cartford Bridge and arrived back at the start for an ice cream in the sunshine after an enjoyable 35 miles.

We have had some long Zoom discussions on how best to restart our monthly rides within the current guidelines, and these ‘mini-group’ rides appear to be the answer for the time being.