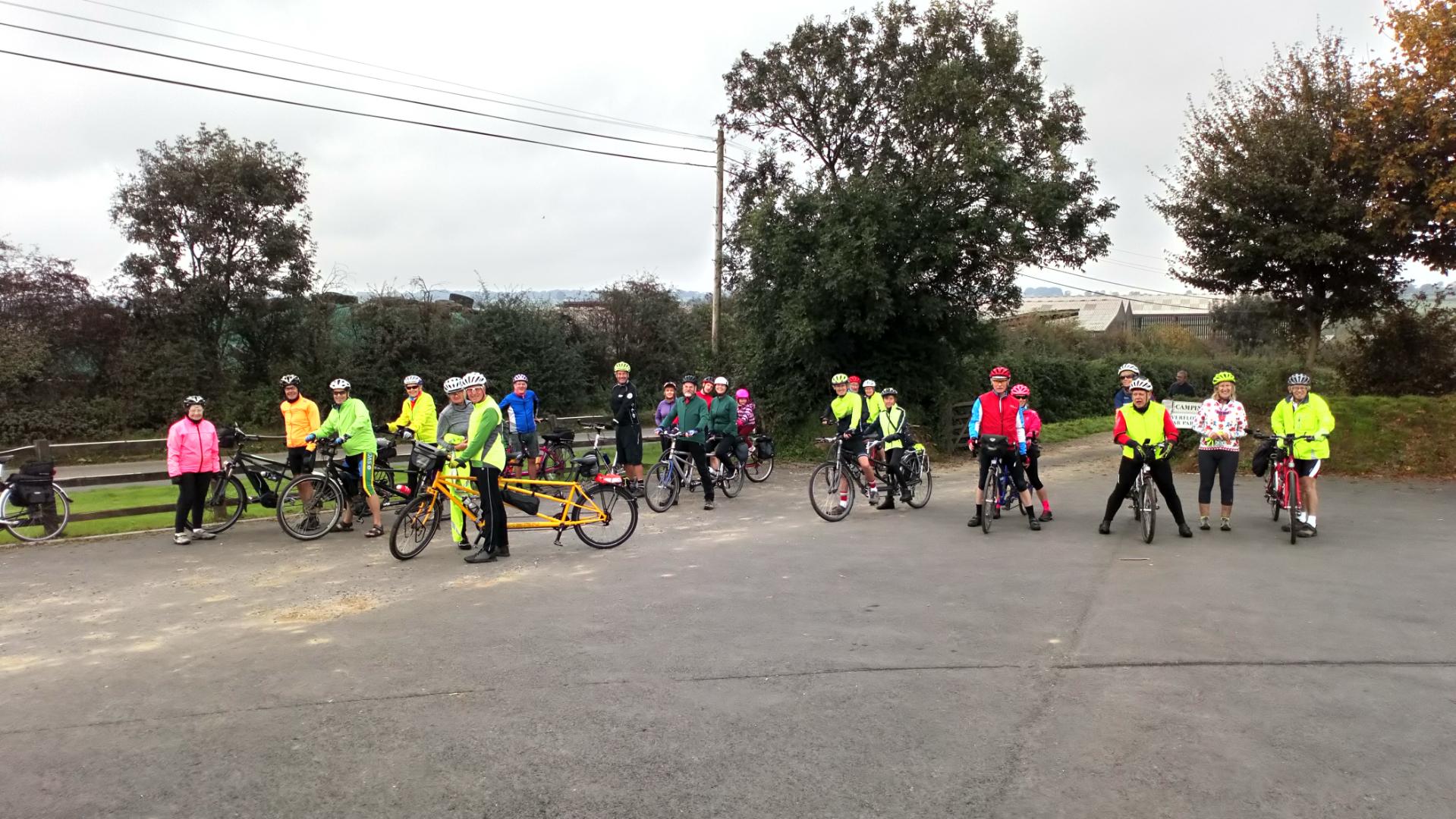 Twenty-four riders, (including the youngest rider, five-year-old Matilda Warren, with her dad James) on eleven tandems and two “half bikes”  met at Barleymow’s Farm Shop, Chard for the Taunton Tandem Group's October ride.  After a quick coffee and pre-ride chat the group set off down the lanes on the north eastern side of Chard, via the hamlet of Nimmer ending up in Peasmarsh. A brief section of NCR 33 towards Ilminster, before climbing up to Kingstone then via Seavington St.Mary, South Petherton and out to the Somerset Levels. Passing the old River Parrett pumping station, we headed for a coffee stop at Yandle’s Café on the edge of Martock. Some members had a look around the craft centre and the gift shop during the wait for refreshment. By the time we finished our teas, coffees and cakes the grey clouds had cleared and the sun came out to enhance the return leg.
Suitably refreshed, the group re-traced the route back towards South Petherton, turning off to pass through East and West Lambrook and passing Compton Durville. Heading back via Seavington St.Mary and Kingstone to the lunch stop at the traditional country pub, the New Inn in Dowlish Wake. We were a bit late arriving for our pre-ordered lunch, but the owners and staff were brilliant coping with such a large number of people all wanting drinks, the bar area had been reserved exclusively for our group. Dowlish Wake is a typical Somerset village with ham-stone cottages and thatched roofs as well as the home of  Perry’s cider .
There was a very pleasant lunch with David and Janet, Katherine and Bill Barnes joining the group as non-riders. As we left David, who joined us for lunch took some photos, as did one of the local residents, who was genuinely interested in who we were and where we had been and going next. At this point Nic and Jane Bard from Chard left the group  having enjoyed the ride.
Somewhat heavier than when we arrived, we set off towards Knowle St. Giles, before turning down to Dowlish Ford and Sea back to Peasmarsh , where we picked up National Cycle Route 33 to take us back through Chard. This cycle route follows the old Taunton to Chard Junction railway line into Chard. It was also “fortified” during World War Two as the Stop Line Way, a line of fortification from Seaton to Burnham-on-Sea. (You can still see gun emplacements in the field and anti-tank obstacles along the route). No sooner had we got onto the cycle track than Mark and Liz had a puncture, ably assisted by James and Nick, “supervised” by Ian and Andy  the puncture was soon sorted, but the first part of the group  had gone on, so we finished as two groups.
From Chard it was all uphill, in a couple of steep climbs and then a series of more gradual climbs back to the top of Snowden Hill ( 210m above sea-level) to the farm shop. By the time the second group got back the sun was beginning to set on what had been a very pleasant day.