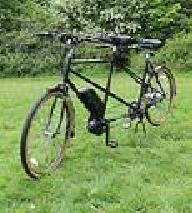 The club had not visited Germany since Osnabruck in 2007 so a return was long overdue. Many large campsites there are filled with permanent or seasonal pitches and finding one that could accommodate our rally has been difficult. After much searching Pia and Tilman found this site for us in the Nahe valley of Germany. 350 miles or 560 Km. from Calais.

The area:
Have you ever been to Germany? Bavaria is certainly the most known and is said to be the most beautiful region of Germany.
The Naheland however is an insider's tip in the southwest of Germany and less touristy.
Contrasting landscapes of wine, woody hills, some open fields and small rivers make the region between Bingen on the Rhine and the Saarland an interesting cyclist destination .
The AONB Soonwald-Nahe,  the rivers Nahe, Glan or Alsenz, the lonely forests of the Hunsrück mountains, and the famous Rhine valley not far away are waiting to be discovered. You will ride on many signposted cycle paths, but also on quiet secondary roads. Plus the disused railway tracks that make up formidable cycle tracks: along the Nahe river and the Glan on the way to Meisenheim, small charming town.

Campsite:
The campsite is situated more or less in between the airports of Frankfurt/Main and Frankfurt/Hahn (Hunsrück). It is some 450 km from the Hook to Oberhausen/Nahe, add 100 km from Calais - much closer than Bavaria! It's a small site and the owners are friendly and welcoming Dutchmen. Unfortunately the nearest store was a 10 km ride away in Bad Münster, but it was a flat ride if you wanted to cycle! Plus you could order bread, rolls, baguette and croissants each day for the next day. The rally had forty pitches plus a number of site owned chalets and caravans.
Website for Camping Nahetal

The event:
A range of activities was available for the rally including:

Routes:
Various rides were planned and are available on our routes page if you want to visit. There are short, medium and long routes, which will be round trips,  and a new category: The flat routes.  Because it's a hilly region they might take you there and back on the same way, but you will definetely not have to climb. Basically, they will take you up and down a river (Nahe, Glan, Alsenz).
Useful Maps. 1:70,000 Kompass (Plasticised, weather proof and tear resistant)
Kompass 3061 ( Hunsrück Obere Nahe - covers the campsite.)
Kompass 3089 (Rheinhessen Rheingau Naheland, Mainz)
Kompass 3093 (Pfälzerwald Kaiserslautern)

All these are available to order in the UK from The Map Shop.