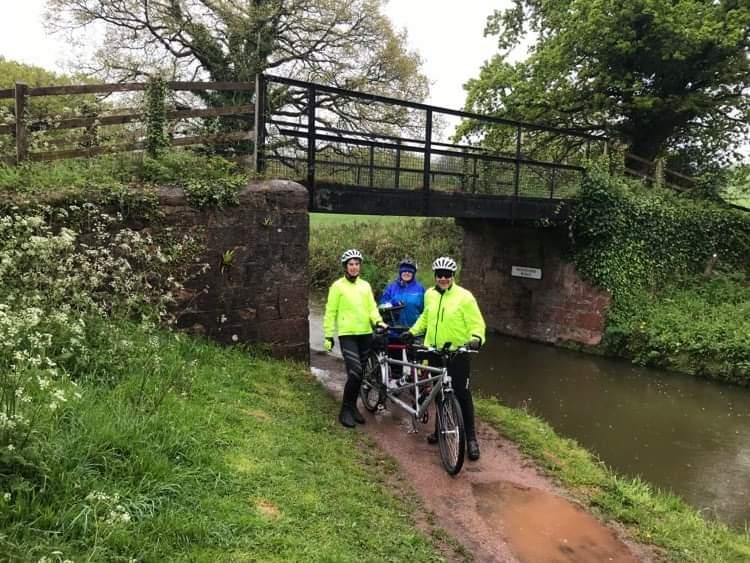 Despite the weather forecast being less than favourable seven tandems and three solo bikes met at Tiverton Canal Basin for a 25-mile ride.
We set off in three groups, two starting off down the canal and our group following the disused railway line forming part of NCN 3. All went well until about 6 miles in when Bill’s chain got jammed, after quite a while, and with considerable help from Rachel, our newly appointed technical adviser, they managed to free the chain and carry on for another couple of miles until the same thing happened again. Time to call in the cavalry, our daughter, Zoe, who lives just a few miles away picked Bill and his bike up and took him back to the start.
We continued on to Bridwell Park for a very welcome hot pasty, cake and coffee. Bill soon joined us and so we said goodbye to Bill and Katherine. We carried on with Nick and Rachel and decided, as the weather was so poor and we were now very late, to cut the ride slightly short and so we had a very pleasant ride back along the canal bank to Tiverton. One advantage of the horrendous weather was the usually very busy canal bank was deserted, that is apart from a couple of runners and the ducks, there was lots of ducks! – every cloud as they say.
The rest of the group had a relatively un-eventful ride, just enduring potholes, puddles and persistent rain. They decided to miss out on the coffee stop and get back asap.
Despite the weather I think everyone had a good ride and were glad they made the effort and came out for the ride; I suspect not many of us would have gone out in those conditions if left to our own devices.
Thanks to everyone for making the effort to come along, it was so nice to see everyone again after such a long time.
Andy and Anita Petherick